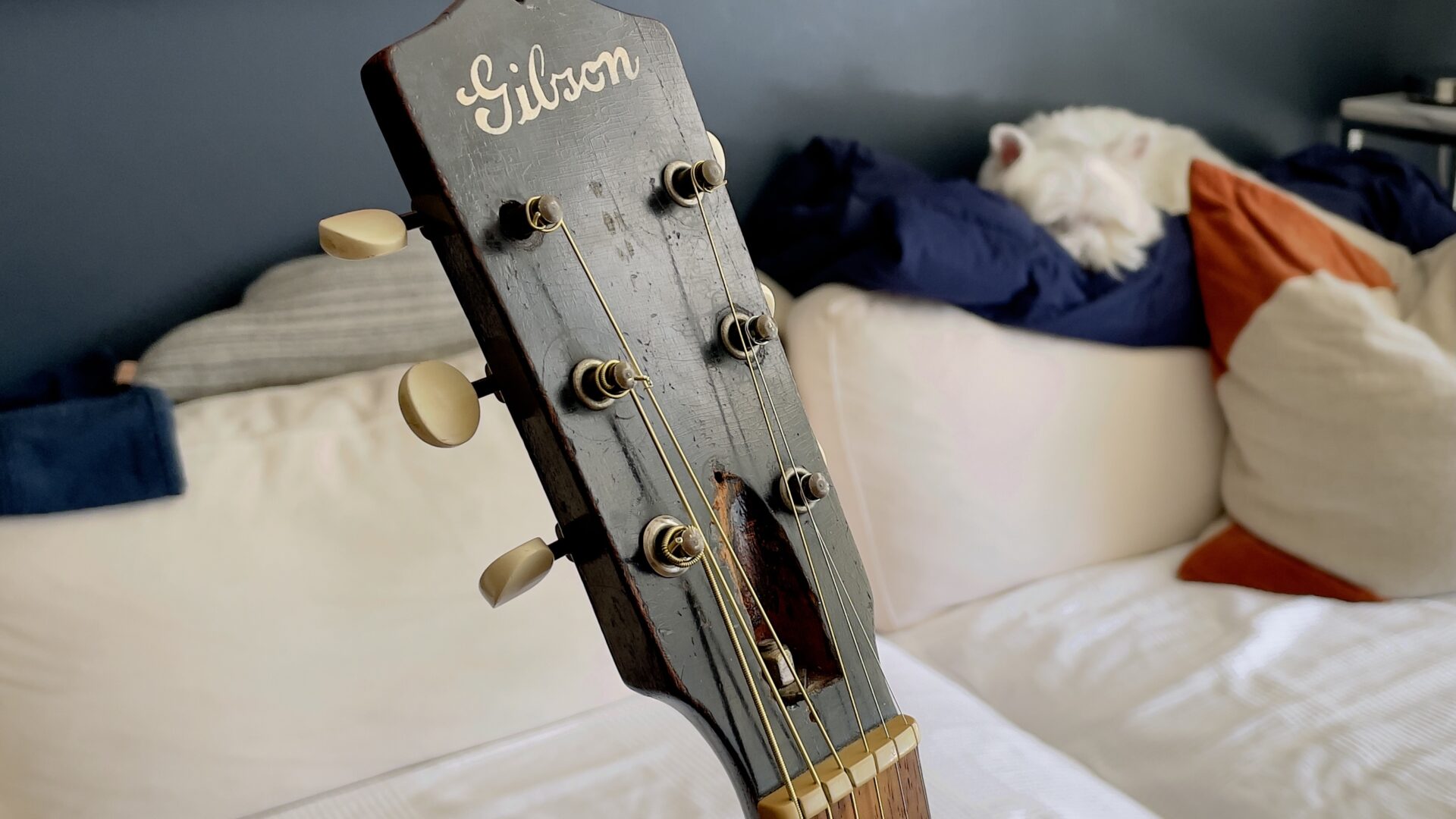 The Resurrection of Uncle

Cat & I found Uncle (in his original case) in Steve’s basement on a trip to her Chicago home. I tuned him up best he would, and strummed an open G major (the strings were a dozen years old, at least). He rang for less than a second before the bridge popped off. The sound of the chord was brilliant, however, and I took him back to New York, where the luthier of legend Paul Schwartz of Peekamoose Custom Guitars worked his magic (he is “The Moose” in the lyrics).

Paul has modded all my guitars, and also built me Fabien, an extraterrestrial Peekamoose M2 that’s the only electric guitar I’ll ever need if I ever need to have only 1. Definitely the one I’m grabbing, running from a house fire.

The original bridge and half of the top’s bracing were not salvageable, and got replaced. Everything else is a time capsule, a literal message in box. The fretboard is still worn where Ernest spent most of his time playing (lower frets in open G tuning from what I can trace), and the flat-top’s 87-year-old finish reveals the most gorgeous cracks when the light hits it just right.

Uncle plays with the flawless ease you’d expect (and demand) of an instrument that was designed to be slung over the back of a blues traveller. It’s somehow light as a few feathers, yet sturdy, resonant, and commanding. The guitar is the same model Gibson, albeit 5-years younger, than the 1929 L-1 that Robert Johnson held in one of the only 3 known photos of him.

In the other two photos, Johnson holds a Kalamazoo KG-14 Guitar. Kalamazoo was Gibson’s sub-brand during the Great Depression.

I’m away from my Brooklyn home for 7 months in Massachusetts, where Cat is costume designing the new and true final season of “Dexter.” She’s right around Day 70 of 120 shooting days.

On a whirlwind trip home to NYC from 11-14 May (whose main mission was to get Luna groomed), I restrung Uncle with a custom set of Stringjoy Brights, and then, as per my ritual on every of his restrings, played a sedated version of Stephen Foster’s “Oh! Susanna” to settle its tuning. Coaxing out the timeless ring I heard on that first Chicago strum never gets old.

The next day, my final day there, I got a haircut, performed “That Old Guitar” on That Old Guitar, and slipped Uncle back into his case. Luna and I then packed up, and flew town. I have room for one guitar in Massachusetts, so this one stays in Brooklyn in a locked closet.

As of this writing, I have no idea of my next return home. Could be a couple weeks, could be a couple months. And so we are, signing out tonight with these memories of New York, Chicago, and beyond, from Lowell.