[real life] Sterling At The Gates 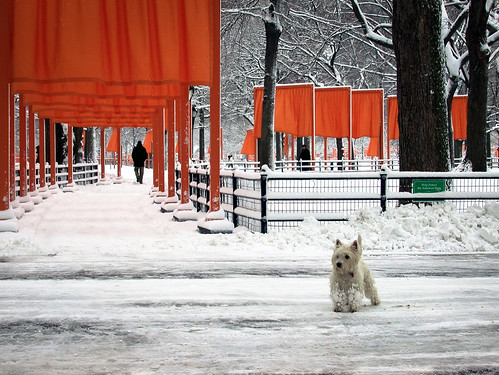 A dog’s will to live is its raison d’être. Dogs do not suffer Albert Camus’s “one truly serious philosophical problem” of suicidal ideation. The canine affirmation is automatic and compulsory — a dog will never choose to end his or her life. It simply can’t. Dogs live, and only live.

A dog, by extension, affirms all lives it touches. Life’s entirety, of course, comprises a spectrum of emotions and ricocheting perspectives on reality — from nihilism to optimism, frustration to contentment, abandonment to love. A dog brought home becomes a nexus and repository for all that home’s experiences, memories and outlook.

Projecting a dog’s POV through ours, there’s beauty in their affirming life while (perhaps) never knowing that life is an opt in/out choice. The phrase “dogged determination” is doggone true. We don’t know what a dog knows, but we sense — and communicate through — some kind of mutual sentience. The true paradox of our cross-species communication surfaces as our dogs act with intention: we know they think — but only because we can’t tell what they’re thinking.

(The know-can’t-tell paradox will also be true in determining whether an artificial intelligence achieves true sentience, but this story here’s about organic lifeforms. Ignore the robots around us, for now.) 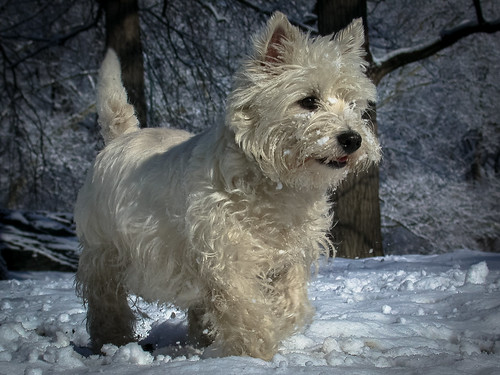 Cat’s and my dog, Sterling, has been sick with bladder cancer for a while. Exactly how long, we don’t know, but in the latter part of February 2015, during a late winter storm, we noticed crimson streaks in his yellow snow. Our vet, Dr Anne Heskel at Park East Animal Hospital in Manhattan, whom we never thought once to replace even after we moved to Brooklyn in 2007, knew that Sterling’s West Highland White Terrier breed is susceptible to bladder tumors. So when he presented with the haematuria, Dr. Heskel performed the requisite urinalysis. The results were positive for the tumor (well, technically for an enzyme that indicates the presence of a tumor) — which of course made the results the most negative outcome. 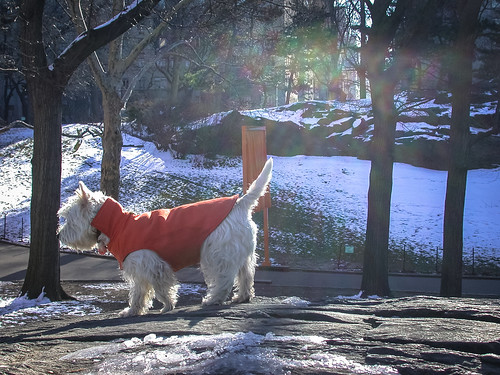 Now the inevitable has become imminent. Sterling’s downward progression has been exponential in the last few weeks, and we are fast approaching zero day. We told few people about his condition, as we had zero desire to “announce” his illness or trace his decline on Instawitterface. This piece will upset some of Sterling’s friends, as they will now be forced to rewrite digital and physical interactions with him in retrospect, but you can put the load right on me for that, it’s ok.

When I posted pictures of Sterling in the past year, I made no direct mention of his illness. For indoor photos, conscious hiding of diapers and incontinence belts became my framing challenge. Not out of a sense of denial (my composition and captions provide that acquittal), rather I wanted to prevent successive images of Sterling from becoming a sickwatch and my social media feeds from clouding over with portents of death. Through his battle with cancer, Sterling has been the ultimate warrior, and, hopefully, this quality above all else will be even more evident in retrospective revisits of his recent images. 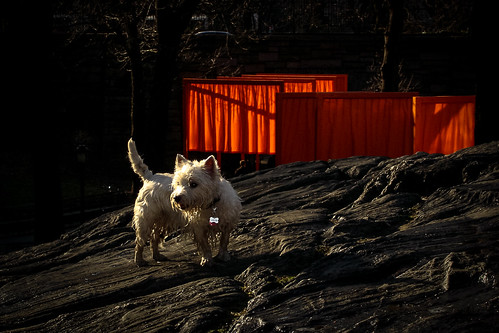 The arcs of your dog’s life do not parallel or intersect as much as trace you. The purpose of living with a dog — or any animal — is to create a symbiotic understanding of the forces that compel and sustain life. The bond is cosmic and subatomic all at once. In this way, your most critical responsibility as a dog owner is to allow your dog to run along side you as often as you can.

The same can be said of the bond between child and parent, though children sass back and point out your flaws for fun. Dogs don’t see your flaws. When you ask your dog if you look terrible, they shrug and ask if there’s any more sausage. 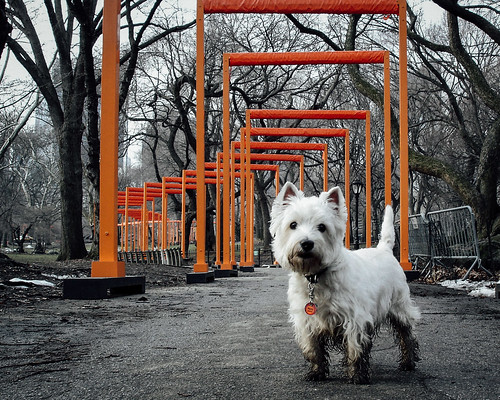 Of course, life with a dog makes the dog a fatalism signpost and a reflection of your mortality. Unless you bring a dog home when you’re 90 years old, chances are you will outlive your dog. Then again, in a few years you and your dog will qualify for tandem bionic operations, and we may have 90-years-old dogs living with 200-years-old people. The irascibility and cacophony of that environment will be comical, but cantankerous folk make the world go round, too. For now, there’s high certainty you will always outlive your pet.

At the time of his TCC diagnosis, Sterling was 11 years old and we had no idea “how long” he had left. Were it not for the white background afforded to us by the snowfall, perhaps the blood streaks in his pee would not have been caught, so there’s some solace knowing we may have caught this as early as one could hope. His tumor, unfortunately, was positioned in a place that made surgical excision impossible. 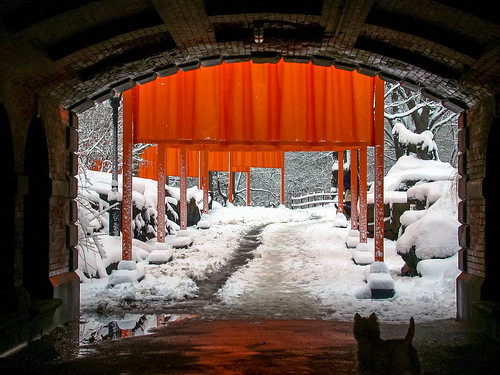 Ten or fifteen years ago, the diagnosis of an inoperable bladder tumor was cause for immediate euthanasia. Between then and now, however, veterinarians discovered a curious side effect from an anti-inflammatory drug, Piroxicam, being given to dogs with all types of cancers as a pain reliever. Tumors in almost 50% of the dogs with TCC bladder cancers given Piroxicam showed significant size reduction, and in 5% of cases, complete remission. Alert doctors created a quick control experiment, replicated the drug’s success, and without the governmental and corporate hurdles that plague human drug development, Piroxicam entered the canine oncologist’s arsenal within a couple years.

Today, dogs with bladder TCC given a course of Piroxicam continue to exceed all longevity expectations, living an average of 300 days from the date of diagnosis, no radiation necessary. So when Sterling’s diagnosis came down in February 2015 and he was prescribed Piroxicam, the over under for his survival was around 10 months later in December 2015. 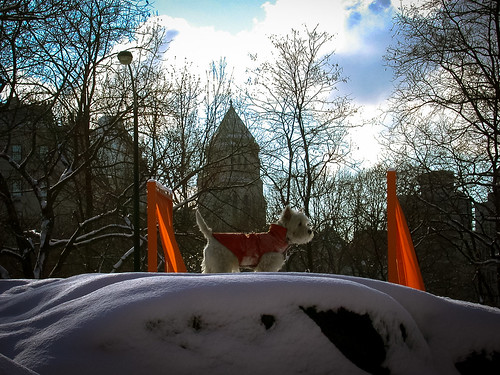 Well, we’re in December 2016, and he is now 13 years old. So from a statistical point of view, Sterling defines (and to some extent smashed the boundary of) the treatment’s positive outlier, short of complete remission.

“Amazing,” in the words of Dr. Heskel, in our most recent email exchange. “His has been a remarkable life.”

In 2005, we lived in the East 60s on Manhattan’s Upper East Side, in a Craigslist-found apartment replete with mice and a tantric “massage parlor” called “Pears” as our upstairs neighbor, when Christo and Jean-Claude installed 7305 saffron flag-draped gates throughout Central Park. Sterling’s and my daily walks into the Park became interactions with The Gates, from the placement of their bases and shells to their flags’ unfurling to their eventual decommission. All of the photographs accompanying this story are from those walks. Sterling was 1 1/2 years old. 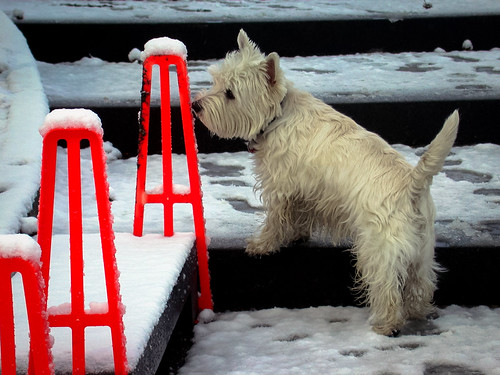 To walk The Gates was to negotiate a 4th dimensional rapids ride on the border of space and time. Christo and Jean-Claude described their work only as a “golden river.” To the extent that time and space are liquid, a journey through The Gates was an invitation to suspend space and time in solution — to let go of linearity and the tyranny of the city grid. There was never much purpose to Sterling’s and my walks through The Gates, in the sense that we never had particular destinations. We just walked as many gates as we could during the time they stood. 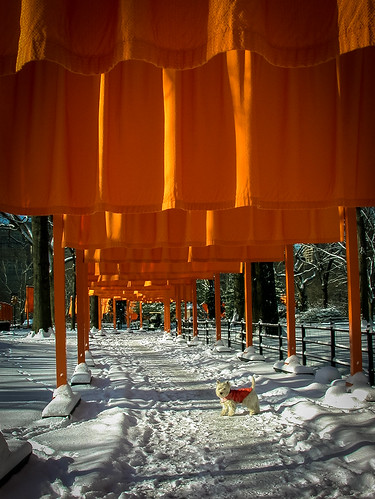 In general, no two walks with a dog ever last the exact same amount of time or take the same exact route, step for step, even if taken on the same street day after day. Dogs don’t walk in straight lines. You will always discover something new in the most familiar places on a walk with a dog. Dog walks are pure journey — ends and destinations be damned.

At one point, I surmised if each gate represented 1 day, the 7305 added up to about 20 years’ and 3 weeks’ worth of “gate-days.” New-Age me believed The Gates were imbuing Sterling with energy to last that long. For all I know, Sterling and I walked through around 5000, which would be 13 years of gate-days. Perhaps he walked as many gate-days as we now know he was destined to live, though new New-Age me doesn’t lend that theory any credence. There are no permanent stars.

Would we love to have him around forever, or even just a few more years? Did I believe, back in 2005 walking him through snowy saffron gates, that he’d be with us for more than another 11 1/2 years? Of course. How could I function otherwise?

Dogs know not of death — only of fighting to live. The “advanced” human mind’s contemplation of death in many ways stands as an impediment to our ability to live full. Religion, philosophy — heck, even entire economies — revolve around an often needless and distracting preoccupation with death.

Morality-driven power structures reject notions of death as pure liberation or abject nothingness, and instead saturate death’s unknowns with fear, in order to limit our behaviors and the choices we can make with our lives. Living as if there is a discrete path to heaven turns life into a checklist and a box score. Most people in this world have been conditioned to believe the choices we make in this life carry forward into eternity. G-d forbid, indeed, that we judge ourselves. 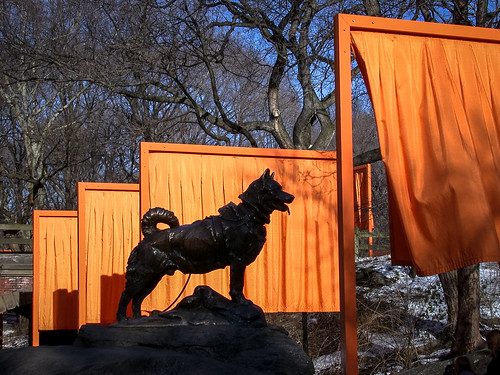 That said, we cannot know if any faith in any conscious afterlife, religious-based or otherwise, is wrong. Pascal’s Wager dictates that infinity is so incomprehensible, the only rational thing to do is believe in it. And since you need not be religious to believe in forevers and the upside is infinite, why not?

I often joke that every note I strike on a guitar propagates as a wave out into the universe ad infinitum (“so no pressure, man”). This is a backhanded self-reassurance, however, that infinite things can — and do — exist. The trick is to balance your morality and ethics in such a way that you don’t get stuck in an infinite loop of you. The inherent danger with “faith in a forever” is to end up on either end of a solipsistic horseshoe — on one side complete apathetic nihilism; on the other complete apathetic narcissism.

Living with a dog can go a long way towards balancing your perspective. If nothing else, the dog will get you outside and turn you into a more social creature. As with anything that keeps you alive and in “vibration,” as Alan Watts called the process by which the universe finds a “watercourse way” through you, the most difficult thing to do is let go, and just live — just “be and not be” — display coherence even in the face of death.

Do all dogs go to heaven? It’s nice to think so, but who knows? Dogs are, even if heaven is fan fiction, a representation of something forever and infinite and positive that our concrete life should embrace and celebrate. And that’s enough for me.

Soon, buddy. No more pain. No more struggle. No more lessons or “training.” Just the journey for the journey’s sake. Love you, Sterling. 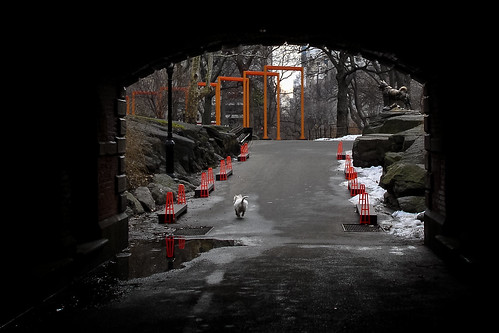